Word and Image: The Hobbit

A passage in The Hobbit that I have been musing over, the one describing Bilbo's reaction at first seeing Smaug slumbering atop the treasure-hoard within the Lonely Mountain:

"To say that Bilbo's breath was taken away is no description at all. There are no words left to express his staggerment, since Men changed the language that they learned of elves in the days when all the world was wonderful. Bilbo had heard tell and sing of dragon-hoards before, but the splendour, the lust, the glory of such treasure had never yet come home to him. His heart was filled and pierced with enchantment..." (pg. 206).

First and last, words-- language-- create and carry the tale in Tolkien's work. Tolkien the philologist was very clear on that, always and fiercely siding with "Lang" in what he saw as an endless contest with "Lit."

My own enthrallment with Tolkien's world began with and continues to be sustained by his use of Language (meaning more than just his creation of languages for the inhabitants of Middle-Earth and beyond, though that was surely among his most lasting and innovative achievements).

Which is why I find myself re-reading The Hobbit, The LOTR, The Silmarillion, "The Adventures of Tom Bombadil" in the wake of the Peter Jackson LOTR movies -- and in preparation for Jackson's first Hobbit film later this year. I love the LOTR movies, having watched them many times--they are brilliant cinematic conceptions.

Which is precisely why my affection and admiration for the movies is tinged with uneasy melancholy, akin perhaps to what Galadriel and Elrond-- and the other High Elves who linger in Middle-Earth-- feel, that is, a sense of something valuable overlaid, buried, lost when a new regime takes over.

The images Jackson and his team created on film are so powerful that I must now struggle to regain my own, the images I created directly and through many readings over many years from Tolkien's un-intermediated language. Now however when I read them on the page, Galadriel for me looks and sounds much like Cate Blanchett, Aragorn like Viggo Mortensen, Gandalf like Ian McKellen, Frodo and Sam like Elijah Wood and Sean Astin...all of whom are so exactly perfect in those roles that they threaten to erase my own, long-preexisting versions, and to monopolize forever the characters they play.

More fundamentally, the medium of film inherently privileges given and monolithic image over the multi-valenced, individualized and organic word. Hence the logic of the extended battle scenes in the films, to take that one example.

But at its core, Tolkien's work is about language as a living force speaking through the individuals who wear the words, the grammar, the syntax for our brief time, before we hand those clothes (sometimes a little worse for wear and in need of repair, sometimes refurbished, with new pockets and buttons) over to the next generation.

So, while I will be among the first to see The Hobbit movies when they are released, I am also keen to reclaim and nurture for myself the elements of Middle-Earth that no film can capture (I know Jackson & Co. are far too wise to believe their movies can do so; I am sure they agree that we judge a fish by how well it breathes underwater, and do not compare it to a bird that flies through the air).

I want to be on my own, left to my own courage and devices, as Bilbo was when he crept down that long, dark passage into the belly of the mountain...when he first crept into the dragon's lair, with its "worm-stench" and the ruddy glare of Smaug's banked fires illuminating the acres of stolen gold and glittering jewels...

...to share then Bilbo's "staggerment" in a place where our modern words fall short of describing the Essence of Things as they were in the World That Was, where film is but a sketch of the surface, below which lurk wild and wonderful things.
Posted by Lobster and Canary at 9:12 AM No comments:

Seven Songs To Celebrate The Full Moon On Monday

The lobster and the canary share with you seven new (or at least new-ish) songs that we find ourselves listening to frequently at the moment-- songs that help bring us to a vibrant yet contemplative place when we need such a refuge or niche. Enjoy.

---Anoushka Shankar, with Javier Limon and Sandra Carrasco, "Inside Me" (2011)
Posted by Lobster and Canary at 3:06 PM No comments: 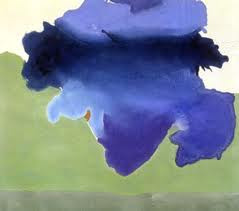 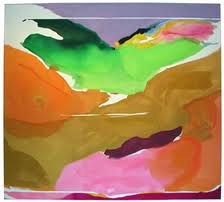 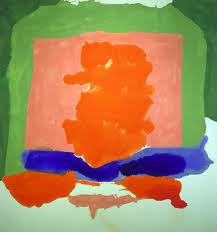 Lobster & Canary welcomes the new year by celebrating the work of Helen Frankenthaler, who died December 27th at age 83. For an especially insightful obituary, click here for Lance Esplund's "Frankenthaler Bridged Genres, Created Worlds of Burning Color"; and click here for the write-up, with slide show, in the New York Times.

May her visionary use of color and her inspired wanderings with form continue to nurture our spirits in the new year.
Posted by Lobster and Canary at 9:06 AM No comments: