All languages spring from the speech of our African ancestors. Two weeks ago, Quentin Atkinson of the University of Auckland published his findings on linguistic evolution. Here's the abstract ("Phonemic Diversity Supports a Serial Founder Effect Model of Language Expansion from Africa", Science 4/15/2011):

"Human genetic and phenotypic diversity declines with distance from Africa, as predicted by a serial founder effect in which successive population bottlenecks during range expansion progressively reduce diversity, underpinning support for an African origin of modern humans. Recent work suggests that a similar founder effect may operate on human culture and language. Here I show that the number of phonemes used in a global sample of 504 languages is also clinal and fits a serial founder–effect model of expansion from an inferred origin in Africa. This result, which is not explained by more recent demographic history, local language diversity, or statistical non-independence within language families, points to parallel mechanisms shaping genetic and linguistic diversity and supports an African origin of modern human languages."
Posted by Lobster and Canary at 4:07 AM No comments: 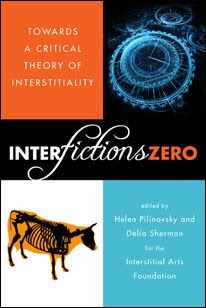 As I have blogged before, the Interstitial Arts Foundation is on the move! (Full disclosure: I am a member of the IAF's Working Group, but my contribution to the IAF's dynamism is very modest, at best.) I encourage all lobsters and canaries to check out three new developments at IAF:

1. "March Madness": 32 insightful, clever, provocative and, yes, interstitial posts-- one for each day of the month, plus a bit of lagniappe. Dance, the plastic arts, chapbooks, and much, much more...

3. Interfictions Zero, "the rolling online anthology of interstitial criticism on interstitial texts, launched April 1 – no kidding!" Read Carlos Hernandez on Junot Diaz.
Posted by Lobster and Canary at 2:59 AM No comments: 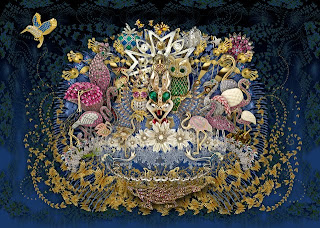 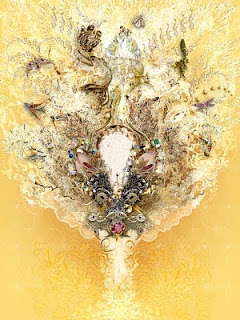 The lobster & canary encountered the worlds of J.T. Burke-- and had a chance to briefly meet the artist himself-- two weeks ago at The Artist Project show at Pier 92 in NYC. We have not stopped thinking about those worlds since. 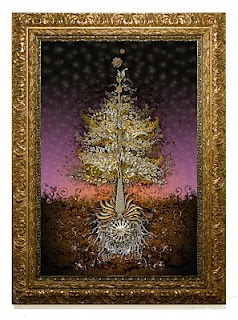 Burke, a successful commercial/advertising photographer, turned to his art full-time in 2006. His technique is a blend of the old and the new: he scours flea markets and estate sales for jewelry and gewgaws (preferably with some wear and tear), then arranges these items into phantasmagorical landscapes, photographs the image, and finally distorts and alters the image digitally. 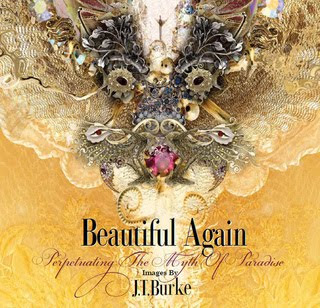 The jewelry and bric-a-brac he uses are ornate, baroque, all those animals that live as brooches on lapels, the bees and hummingbirds, the lions and tigers. Originally shiny, garish, out-sized, having now acquired a patina from use, the creatures come alive under Burke's tutelage. 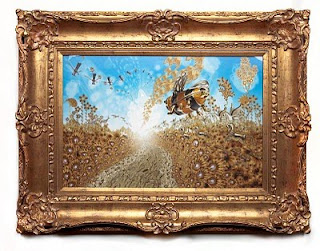 The resulting vistas swarm and seethe with strange life. They evoke rococo wall-paper and Bosch's tryptichs, psychedelic errata, the half-melted landscapes of Max Ernst, and the infinities of mandalas. They pull the viewer into their bizarre but unthreatening beauty. Bravo J.T. Burke-- click here for more on his work.
Posted by Lobster and Canary at 4:28 AM No comments: 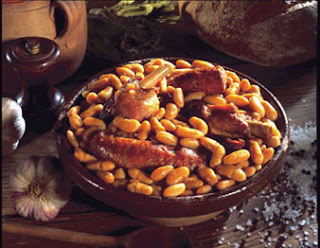 Why don’t we feature food more centrally in speculative fiction?

I do not mean mere descriptions of food, of which the genre abounds. Hobbits are always hungry, the students at Hogwarts enjoy their butterbeer, Cugel the Clever dines on some intriguing dishes in the Dying Earth, and so on. Steven Brust, Jo Walton, and Anne McCaffrey, among others, make the food in their invented worlds something you would like to find in your neighborhood bistro.

I mean rather a focus on food as an end in itself, not as a tool to build a world or adorn an exotic setting. I want food as the central element in the plot, food as a synecdoche for the culture the author is conjuring forth, food as the means to understand the soul of the protagonist. Think the Turkish Delight with which The White Witch snares Edmund. Think Swelter's kitchen-realm in Gormenghast. "Eat me, drink me" in Wonderland.

I want the definition, preparation and delectation of food as an object of philosophy, aesthetics and desire. Food as Brillat-Savarin wrote of it, as M.F.K. Fisher wrote it, as Lidia Bastianich writes, Madhur Jaffrey, Marcella Hazan, Patricia Wells. Food as fantasy itself, not as an ingredient in a fantasy.

For a sense of what I want, check out two newish literary/philosophical magazines about food: Gastronomica and Alimentum . In their pages we live within food as Persephone tastes it in Hades, as Grendel experiences it looking in at Hrothgar’s meadhall, as the banquet-goers savor it in Gabriel Axel’s film Babette’s Feast (“Caille en sarcophage avec sauce perigourdine”!), as the “boeuf en daube” conducts the action in To the Lighthouse, as the timbale summarizes an entire way of life in The Leopard (“The burnished gold of the crusts, the fragrance of sugar and cinnamon they exuded, were but preludes to the delights released from the interior when the knife broke the crust,” in Archibald Colquhoun’s translation). 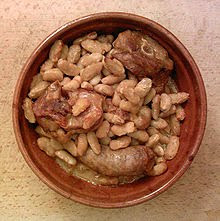 Posted by Lobster and Canary at 4:02 AM No comments: