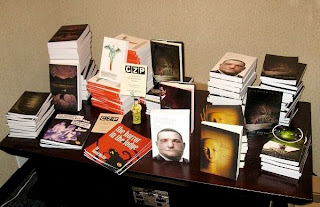 Worldcon ("Anticipation," the 67th World Science Fiction Convention, August 6-10 in Montreal) was wonderful-- Deborah and I could not have had a better time. My parents even drove up to check out their very first con.

I do not usually talk about my own work at Lobster and Canary, but will break that rule this time (begging your indulgence!) because Chizine Publications (CZP) at the con debuted my first novel, The Choir Boats, illustrated by Deborah A. Mills.

More than that, this was CZP's coming-out party, as co-owners Sandra Kasturi and Brett Savory have extended their award-winning Chizine online magazine into book publishing. (The CZP team includes book designer extraordinaire Erik Mohr, hard-working publicist Matt Moore, and effervescent sales guru Jacques Filippi.) At Worldcon CZP also launched Horror Story and Other Horror Stories by Robert Boyczuk, Objects of Worship by Claude Lalumiere (illustrated by Robert Bottenberg), Monstrous Affections by David Nickle, The Tel Aviv Dossier by Lavie Tidhar & Nir Yaniv, and The World More Full of Weeping by Robert Wiersema. All of us CZP authors were in Montreal for the launch, and what a launch it was! We had steady traffic at the dealer's table, and our Saturday evening launch party was madly popular.

The Choir Boats and all the other CZP titles above are available for pre-order here, and will be shipped in September.

At the risk of inadvertently leaving someone out and in no particular order, let me thank the many colleagues and friends who supported the launch with kind words at the dealer's table and/or their happy attendance at the party: Delia Sherman, James and Kathy Morrow, Nora Jemisin, Matt Kressel, Ellen Kushner, Cory Doctorow, Robert Silverberg, Leah Bobet, Greer Gilman, Alaya Dawn Johnson, Ursula Pflug, David Hartwell, John Kenny, David Anthony Durham, Farah Mendlesohn, Stefan Hoegberg, Marie Bilodeau, and Daniel Duguay. For the many others I fail to name here, please forgive--the con was quite a whirlwind and my notes got sketchy already by the second day!

* A panel moderated by Faye Ringel on "Theorizing the Roots of the Fantastic," which--among other things--demonstrated that serious academic criticism can be delivered with flair and humor as all four panelists gave us insightful papers leavened with warmth and spirit. The panelists were: Greer Gilman, Laura Wiebe Taylor, Jeri Zulli, and Neil Easterbrook.

* Neil Gaiman reading an homage to Jack Vance and then one of the creepiest love letters ever.

* "Rainbow Futures," a panel on how media SF deals (badly or not at all, for the most part) with gay and lesbian characters. A lively and thought-provoking session, with panelists including Cat Valente, Cecilia Tan, and Lila Garrott-Wejksnora.

* Nora Jemisin reading a chapter from her forthcoming debut, The Hundred Thousand Kingdoms.
Posted by Lobster and Canary at 8:48 AM 2 comments: